Folks, for those of you who maybe didn't make our Show in March 2016 - here's a 1-page snapshot of the event. If you were there among the 20,000 other car & bike enthusiasts who did attend, it will be a good summary of what you saw and experienced.

This is more designed to make people aware of what they might have missed. 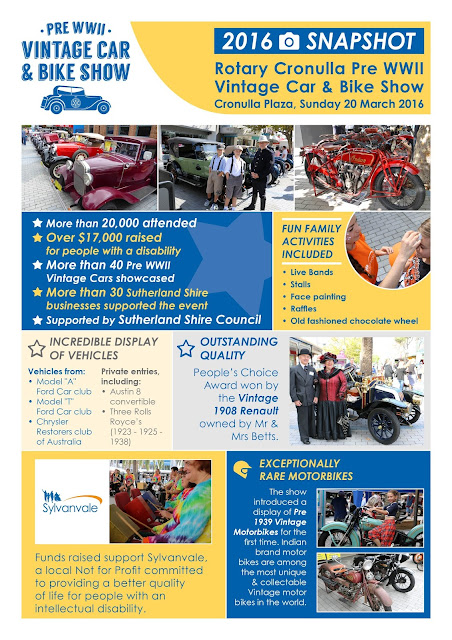 Charged with making the 19th March 2017, our 3rd Annual Show a bigger and better show, Event Director, Ken Warburton says he'll have a major announcement to make toward the end of 2016.

Ken said, "We are working on some major drawcards that will broaden the appeal to all the family and be a real feather in our cap for Cronulla and our show."

Ken went on say "the cornerstone of our event will be an intoxicating mix of rare Pre-WWII cars & motor bikes - vehicles and machines that you just don't see every day. It's the biggest event of its kind in Sydney."

Our Show in the Cronulla Mall is a place where the timeline unfolds like the pages of history, a proud new chapter is set to be written in March 2017.


Mark it on your calendars now ...

Cost: Entrance is free of charge

This is a community based, non-profit event and will once again be organised and run by volunteers from Cronulla Rotary with all funds raised donated to Sylvanvale.